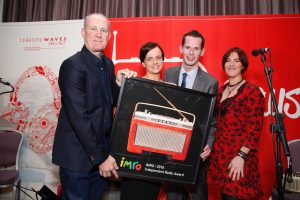 Beat 102103 has won the prestigious IMRO Independent Radio Award, in recognition of its continued commitment to supporting Irish music creators. The regional radio station is based in Waterford and broadcasts to counties Waterford, Kilkenny, Wexford, Carlow and South Tipperary.

The award was presented by Victor Finn, IMRO Chief Executive to Gabrielle Cummins, CEO of Beat 102103 and Niall Power, Head of Station Sound at the RadioDays Ireland Broadcasting Conference which took place in Dublin today. Beat 102103’s commitment to Irish music can be seen in the wealth of initiatives and promotions designed to highlight Irish music scattered throughout the stations’ schedule.

Live on-air sessions for Irish artists both signed and unsigned, Irish Beats a weekly two hour programme dedicated to Irish music with a specific focus on artists from the SouthEast region, Irish artists on the playlist of every DJ on the station and opportunities for Irish bands and artists to perform at live venues through the region for listeners to Beat102103. In addition, Beat 102103 is part of the Irish Association of Songwriters, Composers and Authors (IASCA) Play Irish initiative, which aims to increase the amount of Irish music played on radio. For its part, Beat102103 highlights 4 Irish artists each month with one artists song played at 9.25am every morning for one week as part of Beat Breakfast.

“Every member of the team in Beat102103 is fully committed to the promotion of Irish music and Irish artists. We love introducing our listeners to new Irish music from as many different bands and solo artists as we can. Our Play Irish Artists of the Week gives extra prominence to Irish music at a key time in our schedule and the IMRO Radio Award is testament to the work that we put into the ongoing promotion of Irish music. We are very proud to receive the IMRO Award and it will encourage us to continue to provide Irish musicians with a platform for their music” said Gabrielle Cummins, CEO of Beat102103.

“We are delighted to present the IMRO 2018 Independent Radio Award to BEAT 102 -103. It is only fitting that IMRO should acknowledge and applaud independent Irish broadcasters who champion and support music creators day-in-day-out. It is well understood that consistent airplay accompanies commercial success, raising an artist’s profile and importantly generates public performance royalties for songwriters and music publishers”  Victor Finn, IMRO Chief Executive