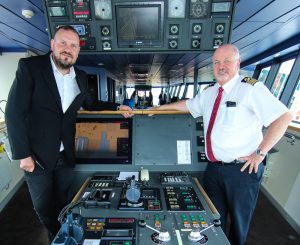 Stena Line has signed up for the first twelve months of the All New KC Show which will feature Cork comedian, Ross Browne as co-presenter.

Chief Executive of Cork’s 96FM, Kieran McGeary said “we’re very excited to be launching the All New K.C. show at the start of July.   Stena Line is a great brand to have onboard – no pun intended – and we look forward to working with them over the next twelve months and beyond.”

Diane Poole OBE Stena’s Line Travel Commercial Manager – Irish Sea South said: “We are delighted to be the title sponsor of Cork’s 96FM’s All New K.C Show. As well as helping to get listeners days off to a good start we can promise there will be plenty of reasons to bounce out of bed in the morning including chances to win some great prizes over the coming months.”