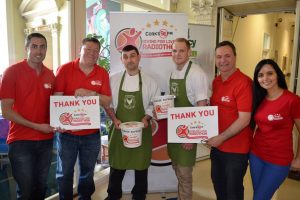 The annual Cork’s 96FM’s Giving for Living Radiothon is getting underway tomorrow (Thursday 25th May 2017) at 6am. This is the 10th Annual Event and the cumulative total raised so far is in excess of €3.9 million.

All 96FM programming between 6am and 7pm on Thursday and Friday and between 10am and 6pm on Saturday will be broadcast from a special studio at the Mercy Hospital. There will be regular links from the Cork’s 96FM Streetfleet based at the other charity locations.

Listeners are being encouraged to hold “Coffee Breaks” to raise money. Again this year, Bus Eireann drivers will man the city’s “biggest change collector box” at Cork’s Bus Station on Parnell Place. Many schools have also  signed up for a “No Uniform Day”.

Chief Executive of Cork’s 96FM & C103, Kieran McGeary,  said: “It’s hard to believe that this is our 10th  Annual Giving for Living Radiothon. It only seems like yesterday that we were launching our first one. The event is now firmly established as one of the biggest in the fundraising calendar in Cork. The generosity of the people of Cork never ceases to amaze us. Hopefully this year will be no different.