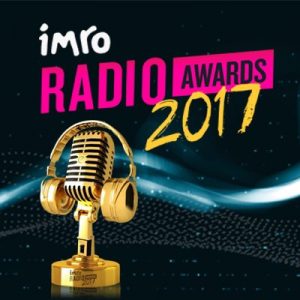 IMRO (Irish Music Rights Organisation) was today announced as the title sponsor of the Irish Radio Awards. The IMRO Radio Awards will take place at the Lyrath Estate, Kilkenny on Friday October 6th 2017.

The IMRO Radio Awards recognise the achievements of Irish radio industry personnel both on-air and behind the scenes. In addition to the Outstanding Achievement Award and the IMRO Radio Awards Hall of Fame inductees, 37 Awards will be handed out on the night in what has become one of the highlights of the Irish radio calendar. IMRO has confirmed it will sponsor the Awards for the next five years. The BAI (Broadcasting Authority of Ireland) has also confirmed that it will continue its very valuable support for the Awards.

Speaking about the new sponsorship Victor Finn, IMRO Chief Executive said “IMRO is delighted to sponsor the IMRO Radio Awards – the annual accolade that recognises and rewards great radio broadcasting, production and presenting throughout the island of Ireland. This is the most important event in the radio calendar and it ensures that the very best standards in Ireland’s radio industry are constantly maintained to the highest possible level”.

Chairman of the Radio Awards Committee, Sean Murtagh said “We are thrilled to welcome IMRO as title sponsor of the Radio Awards. The radio industry has worked with IMRO on various radio and music initiatives over the years and no doubt, IMRO’s involvement will result in a continuation of what has always been a fruitful and positive relationship. We are looking forward to working with IMRO on what will be the biggest and best Radio Awards night yet.”

Entries for the 2017 IMRO Radio Awards are now open with the shortlist being announced in early September.