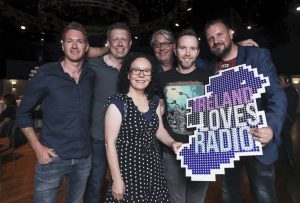 “Radio stations are in the business of creating success stories”, that’s the message from Gabrielle Cummins, Chairperson of the Choose Radio Group. The latest JNLR listenership figures released today show that Irish radio stations consistently deliver audiences of millions to advertisers and brands. Radio continues to be the audio medium of choice for people in Ireland with a massive 85% share of the audio market in Ireland.  This compares with 7.8% own music, 5.6% Spotify and 1.1% podcasts.

“Every day, radio stations throughout the country work with businesses, advertising agencies, planners and marketing teams to create effective advertising campaigns which result in increased business for our advertisers. Businesses are realising that radio is a subtle and effective platform for reaching their target audience with an unrivalled ability to target and connect with people that no other medium can match. Any business who wants to build on its current strengths for future growth will no doubt have radio advertising in its plans” added Gabrielle Cummins, Chairperson of the Choose Radio Group.

With a sample size of more than 16,000 people, the JNLR is the most robust research conducted in Ireland. The latest JNLR figures released today confirm the popularity of radio in Ireland with 82% of the population tuning in every day. This translates into weekday figures of 3.16 million listeners.